Studies showed a beneficial effect of the physical practice to improve quality of life and to fight against tiredness of the patients with multiple sclerosis. In the sport area, it has been showed that cooling (body cooling) improved performance. Body cooling is frequently used in the treatment of the symptoms of this disease.

It remained to connect this various knowledge: developing an equipment and a protocol combining these elements. Most work undertaken on cooling have, as a common point, to cool the body before the effort (cold baths, cabin of cryotherapy…).

Our project is based on a double partnership with a university and a creator of cooling vest. It aims at allowing the patients to be cooled during the effort, thanks to an adapted equipment (creation of a specific vest with the company B&C Cryoinnov), and the validation of a protocol of use of this technique during the effort.

Cryoinnov set up a concept to regulate the temperature of the body thanks to the FirstIce technology (cold pack) that diffuse a non-aggressive cold (no risk of burn). The concept is recognized in the high level sport (Olympic Games, French team of football, etc) and in the field of industry (study conducted with the company Arcelor Mittal).

A first study conducted in partnership with 2 student (Master degree 1 APAS) shows an improvement of the quality of life and an attenuation of the physical tiredness of the patients with MS, by associating the cooling with the physical-activity. The vest developed and placed at the disposal as of patients proved to be perfectly adapted to the specifications. The cooling vest made it possible to the patients to perform longer, but also to do the daily activities (ex: household). 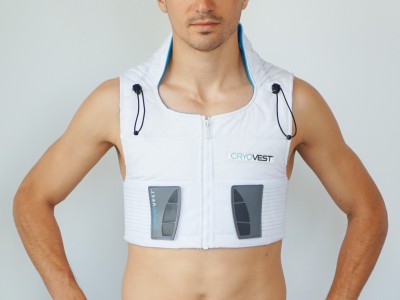